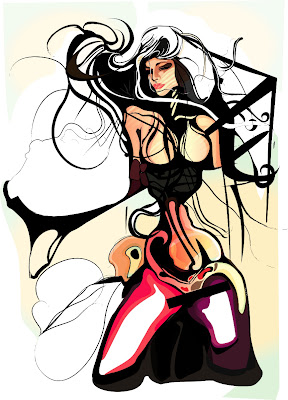 Oh, you naughty Sagittarius — or should I say, Vagittarius — Smart, sexy and vivacious… also, an awful liar. And, come to think of it, you couldn’t joke your way out of a paper bag. Though, you tend to be an excellent exaggerator whenever you tell a story about yourself (which you dearly love to do). I once had a Saggitarian friend who would predictably exaggerate by a quotient of 2.5 when relating any anecdote. If she told you she had to wait an hour for her sushi, you could bet she was only waiting for about 25 minutes. If she talked about her crazy night at the bar and how she got hit on by 10 women, her body count was probably somewhere around four. Which is still a respectable figure, and hardly surprising. You’re just the kind of girl one wants to make small talk with while sipping on a Marasca Fizz. Open, friendly, and absolutely allergic to commitment. It’s all fun and games until someone gets stuck paying double the rent. Probably not you.

Your sign is half man, half horse. And even though you couldn’t possibly have a horse’s oversized member, you possess a set of softball sized cajones. It’s not as though you walk around with a chip on your shoulder, unless you happen to end up in a room full of academics discussing Judith Butler: “The point is not to stay marginal, but to participate in whatever network of marginal zones is spawned from other disciplinary centers and which, together, constitute a multiple displacement of those authorities.” To which you would probably reply: “I’m sorry, I really don’t want to think about the multiple displacement of your marginal zones.” In situations like these, you’re liable to be honest, if for no other reason than you can’t help yourself. Any type of establishment is simply not your scene.

Your most comfortable in action, so if a misguided girlfriend tries to tether you to endless weekends trolling Bed, Bath & Beyond, you’ll heed the urge to flee. You’re capable of being faithful, but domestic bliss is not your natural habitat. You prefer a life of adventure, on the high seas or surfing the couches of your many friends. Sagittarians need to travel. I know many who keep a tote packed and passport ready just in case, but I know even more who would pick up and go with nothing but the shirt on their back. Joseph Conrad was a Sagittarius. Just be careful when picking your travel companion. Is she highlighting entries in her Let’s Go India? Yeah, do yourselves both a favor call it off before you leave her in Goa to hitchhike to Nepal. Sightseeing is for pussies. Real women go off-roading.

There is an off chance you don’t have a penchant for travel, and if that’s the case it’s impossible to make you leave home. Perhaps you feel you need plenty of time to think, in which case you may spend your live exploring your inner-terrain. Emily Dickinson was this kind of Sagittarius, so honest she couldn’t stand to be around people. You’re a seeker and philosopher, and fiercely independent. You choose noble causes and defend them eloquently, with impeccable logic. These qualities are essential to your sign, whether you prefer to spend your time writing tortured poetry or doing body extensions. Even if you’re outgoing, you’re not exactly a team player. Tennis and golf, maybe. Rugby and basketball, maybe not so much.

The problem, in sports and at the office, is that you are pretty sure you’re smarter than most people. And, as much as I hate to say it, you probably are. But, that is no excuse for snapping at people who are not as enlightened as you. If you’re interested in your work, you’ll do whatever it takes to get the job done, even if it means compromise. Still, I would recommend a job that doesn’t require close collaboration. For instance, I know an excellent Sagittarian tattoo artist. The work is perfect for him because he gets to talk to people all day about body art and fishing — but his work is his own. Massage therapist, savanna guide, philosopher queen, you name it. But if you try to stuff yourself in an cubicle on the 33rd floor in the air and there’s bound to be trouble. If nothing else, you’ll run away sooner or later.

Your blatant honesty is likely to get you into trouble if you don’t watch it, though everyone will probably forgive you because they know you’re just too stupid to keep your mouth shut. Anyway, it’s kind of nice to be around people who say exactly what they think. On the other hand, I’ve seen Sagittarians slip up and call others fat, stupid, alcoholic, you name it — always spot on and usually without menace. Sometimes you’re bitterly sarcastic, especially if there’s something going on in your own life that’s making you dissatisfied. But otherwise, you’re just calling it like you see it — and why should anybody be offended by that? Not everybody is as open to the truth as you are, my dear. Most people, Trinity, would rather live in the matrix.

You really do have a bit of a messiah complex, especially when you get excited about something. It makes people want to follow you, until they realize you have that crazy gleam in your eye because you just spotted a slot machine. If you’re not a gambler, consider yourself lucky. If you are a gambler, remember to thank heavens you’re so lucky. Like Pisces, your ruler is Jupiter, the king of the gods; though if you prefer, you can think of luck as a lady. I wouldn’t recommend the holy game of poker, as you have absolutely no poker face. But I would bet on you at the blackjack table, or at this crazy crapshoot called life.