The Last month or two! 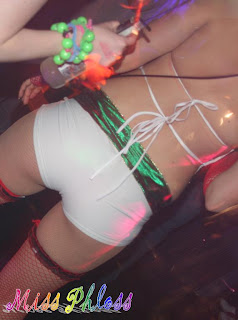 Lots of partying!!
Christmas – Auckland bar called Kiss hold a Gig specifically to raise donations for our City mission charity. Some of us went out about a whole haps of toys for the kids who wouldn’t get a christmas! People were bringing food, HUGE teddy bears, unwated clothing seriously there was SOOO much stuff it was crazy!
We did our bit then got boozed and enjoyed the free entertainment we had earned with our good deeds!

I had a lovely christmas ASS!!

After christmas we all chilled out and enjoyed doing not much for a while to get ready and save our few pennies for New Years Eve! I spent most of my time just doing nothing which was GREAT, the weather was lovely and I got to wear what ever I wanted the whole time!!

New years eve, Flick me JustinSane Tania M and Niddies all did the marathon. Three gigs in one night… started at about 10pm at Studio for GateCrasher, which was awesome!!
Then from there went to Kiss Bar for their Genesis 07 gig. The music was a touch harder, but still great for bouncing around too.
We took Flick’s younger sister into town for her first RAVE gig, it was hillarious. There is nothing funnier than seeing a chick who normally listens to Rock and Hip Hop head banging to Hard Dance / Hardstyle!!

We met up with Phunkin Phuturistic there too… she’s the best… in all her almost naked glory!! I was guttend I missed out on a whole lot more nakedness later on in the night! Most of the time I’m the one involved in the nakedness so for me to miss THAT was like so sad!

Then about 2pm we all bundled up into cars, including some tag allong turists (hillarious – pitty in comparison to the UK our scene is so small) and headed about an hour out of the main city to an out door dance party, IN THE MIDDLE OF FREAKING NO WHERE!!

It was pretty cool tho, lots of people all over the place in varying states of disarray – We got there about 3am. We went down to the “dance floor” and had a boogie for a while and only managed to get a little bit of sleep before getting up and keeping on going in the morning!
It was very differnt, we did get a little bit of a down pour but we all kept bouncing around under the roof. The lasers and lights made lots of little rainbows of the raindrops, it was really pretty altho rather damp!!!

Next post will be Summerdayz! but later I’m zzzzzzz