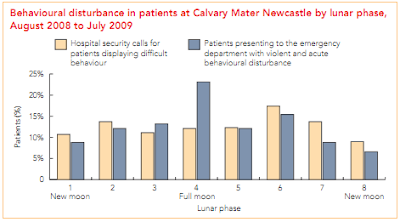 The term Lunatic is derived from the word Lunar (Moon).
CURRENT MOON
about the moon
Makes a lot of sense really – Full moons seem to make people go crazy! I’ve always wondered if it was pure superstition or if there really was any science behind it. And from five minutes worth of research it seems like there are heaps of theories on both sides an no 100% conclusive answers. Its seems that Animals are very aware of the moon and its gravitational effects on the earth, however there is little to no scientific evidence to demonstrate the effect on humans.
I believe there is such a thing as the “Full Moon Effect” however it seems that maybe I am a little more superstitious than I thought.

I’ve always found that I get really antsy, depressed and sometimes restless without a cause (and its not always in sync with my PMS! Ha-ha).  My flat-mates are used to my reactions if they see me moping about or grumbling they humour me with “Is it a full moon tonight Missy?!” Often they’re right (other times its just PMS!) ha-ha! Although it’s nice to have something to blame my moods on, I’ve been keen to look into it more so that I could either learn how to manage it or find out what the ‘devil’ was happening to me!

Here are some bits and pieces of info about it. The first link is researched and supported the second two are unsupported and speculatory. Read for yourself.
Source: http://www.mja.com.au/public/issues/191_11_071209/cal11072_fm.pdf

Our study supports the premise that only individuals with violent and acute behavioural disturbance are affected by the phases of the moon. These individuals, with the enlightened need to use alcohol and psycho stimulants to manifest their delirium, are far more likely to do so in the light of the full moon. Is it just much more fun to indulge in drugs and alcohol under a full moon? Or is their behavioural disturbance directly influenced by the moon?

If you breathe large amounts of positive ions without an equal amount of negative ions, you will actually become lethargic and in some cases sick (high positive ion concentrations in the air are associated with the full moon).  75% of the general population react favorably to negative ions but are adversely affected by positive ions. In other words, 75% of the general population goes into different ranges of depression and 25% become hyperactive.

The full moon affects many people worldwide causing emotional instability and insecurity. Since the gravitational force of the moon is strong enough to cause the tides, therefore it is possibly changing the gravitational effect on our glands and organs which can affect our moods.

I don’t think I’m the only one aware of  a “Full Moon Effect” or maybe I have “acute behavioural disturbance” that I wasn’t aware of and should really stay away from drugs and alcohol during a full moon.  I find it hilarious that even most supported reports always end with a “maybe there’s more to it” caveat!

Does the Full Moon affect you?