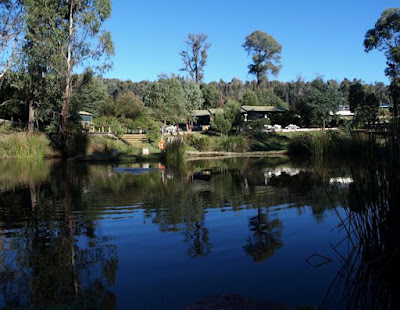 Nestled on the slopes of Mount Gordon, Marysville Trout and Salmon Ponds was first developed in the early 1980’s. It lay dormant for many years until it reopened to the public in December 2003.
The ponds are fed by spring water flowing from the surrounding mountain forests. The water is pure and crystal clear, no farm or fertilizer run-off, and no human or chemical contamination and fish are bred to feed and up keep the farm’s stock. The water flows by gravity through aqueducts that wonder up the valley floor.The ponds have been nurtured to form a natural ecosystem and habitat for the fish with reedy banks, overhanging trees and gently flowing waterfalls.

Click in to see more!
A dog friendly park it was a perfect choice for us to get out of town, a group of friends (and one hyper puppy) and have a blast out of the big city. A pleasant hour and forty minutes drive through forest, trees, bush. The air smells beautifully fresh, some trees show older scars of past bush-fires in the area. After coming out of the windy roads we reached a short stony drive. 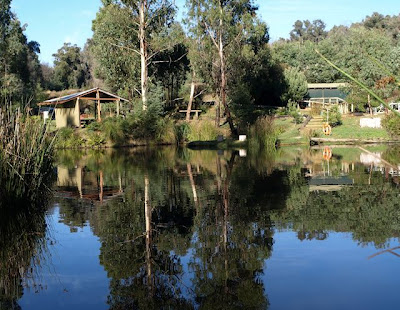 Inside, the hill sports five or six ponds, Each with different sized fish and difficulty of the catch. The ponds have become a habitat for many aquatic animals including, nymphs, mud eyes, frogs which croaked loudly next to us as we fished and worms. During spring and summer the fish feast on the many flying insects that land on the water.The ponds were surrounded by tall peppermint, stringy bark and messmate eucalyptus  sliver and Blackwood wattles, native grasses and a many varieties of ferns including the majestic tree fern and are slowly recovering to their former glory since the February 2009 bush-fires tho the scars remain. 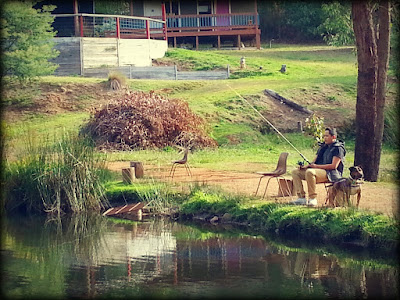 The fishing ponds have been lightly stocked with rainbow trout and Atlantic salmon and range in size from 500 g up to 6 kg (the big ones are hard to catch – very sneaky fish). It can take some time to catch a fish although I caught My first within the first half an hour we were there.  Over the next two hours we moved around the ponds. Finding spaces between reeds to cast off and watch the air bubbles circle the float. Each time one went under there would be a shreek of excitement. a short, not always successful fight later, a rainbow trout would be netted and plopped into a waiting bucket of water. 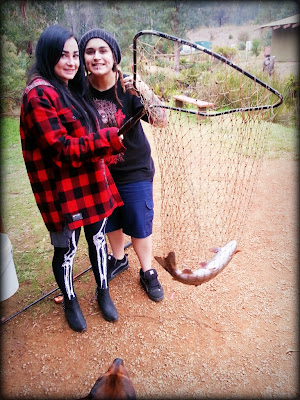 For the several families there they also have ponds where little kids of those in a rush can catch a trout in very quick time. Picnic tables, small shelters or cabin decks and gas barbecues are scattered around the ponds so you can have an enjoyable picnic and cook your fresh rainbow trout or salmon. It is a great place to learn how to fish or hone up on your fishing skills, have picnic lunch or a romantic twilight dinner. 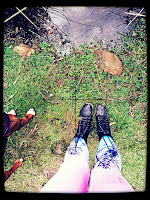 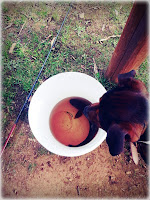 They are open 7 days a week from 10 am until sunset including all public holidays & school holidays, and Christmas day & good friday and for the week stomached they will gut and season your fish or prep it in an ice filled chilli-bin (eski).  Once we got ours home it was straight in the oven to grill with our of the smaller of our catch. A dash of lemon juice and absolutely nothing can beat the taste of super freshly caught fish! Soft, sweet, juicy and succulent! 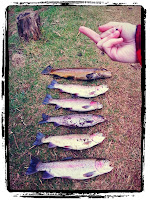 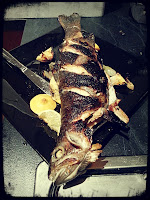