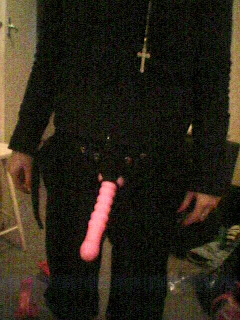 The last couple of weeks / weekends have been crazy.

So last weekend I tried to fit TOO many things into my night – and I missed out on 2 events I’d been dying to go to. Seriously I have a problem with OVER commitment (as well as just committment in general but that’s another story) I say YES to too many things cos I genuinely want to be everywhere at once!
I missed out on the Lesbian Ball, which I was worried about attending by myself and an event after the Erotica expo called ‘Kitty Club’… There will be more, I have to remember that. HOWEVER – I did get to a few places.

The First Roller Derby of the Season! Wow it was awesome.. I’ve a video to upload when I finally get a spare hour to edit and upload.

Then an awkward 30th – ever attended a party of the EX of someone you’ve got an interest in. Seriously! Its like trying to get on with someone elses used underwear. Like sloppy seconds with that used stench hanging around… Yea awkward.

Then after that I had to go perform at Salvation’s 5th birthday party. It was fun, but I was still feeling slightly sick and drained so it was hard to have the energy levels to interact with a whole lot of people I didn’t know.
From there I REALLY wanted to go to Kitty Club, but by this time it was 2AM and I popped a friend a txt and he’d already left – from a guy that like looking at hot dressed up women it was a bad sign, so I didn’t bother… Maybe I should have.

From THERE I went to Techy as Seba, and found a very nice barstool -set in front where I could see everything that was going on, and got the fuck off my sore feel Oooowwwwweeeee Poor old me! Gosh I was worn out.
That same weekend was the Erotica show – I decided to spend up large…

I see fun times ahead!
Ooooohhh YEA… Took me AGES to find something that wasn’t HORRIBLE and black tho. ugh. 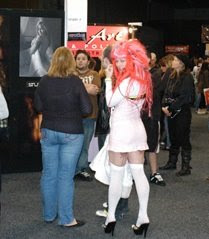 I can’t go anywhere with out getting snapped!
So that was LAST weekend… This week was a little less crazy!
Tues day was M.A.C. Industry only Spring makeup line lunch party at their chancery store… It was great – I got to meet a HEAP of new faces and ended up getting solidly DRUNK – bubbles on tap (figuratively) not so good!
I should have had more of those salmon things! But I had a really good catch up with an old friend Helena McAlpine who is now working on MTV / C4 and she gave me some really good advice and tips, so that was great… I love her to bits! Its great to have someone to look up to, who’s ahead of you in the race to inspire you…
During the week I entered a ‘Top Friend’ social networking competition… I did a video and it was great – and I think I have currently more friends that most of the tweens that also entered. Oh except a guy who works at a video store and has 4,000 subscribers on youtube…. NZ Chris Crocker anyone?!!!
This Friday was VERY chilled… watched ROVE on tv… then went to a Go-Go competition to Talent Scout.. the finals are this weekend. home early! Nice..
Saturday was wet but fun…. First it was the Nocturne Magazine’s SECOND issue release party – I’ve read the magazine and its fantastic.. – GO BUY IT!
Then I tried to head up to Flirt Girls Club Night- but obviously both the bar and I had the date wrong. Sign was up and no one was there… well some girls had turned up as well but were in the Family & Naval downstairs watching drag shows. Ugh – too much boy there for me.. So me and Lou left and headed fruther up the ‘K’…
I tried desperately to make it to the Midnight Rock n Roll circus at 12- Cicumstances – annoying people – and yea fuck fuck fuck I’m sorry girls I REALLY tried… I’ll do my best to be there this week!
Sunday we were SUPPOSED to go to the ‘Skin and Steel’ piercing and tattoo convention ( I want more Ink!!) but we vetoed it for staying at home, enjoying the sunshine and doing some spring cleaning!! I bought some pink and green plastic stackable drawers so now everything sorted neatly.
Oh and My SHOE SHOP is all set up – Once I’ve paid off what I owe to my wedsite developer I’ll ask him to make me a more user friendly shop to work with – but we’re getting there…. Take a look – link here! Miss Phloss.com All the pix are in a SHOP photo album on my profile too! I Shoes!!!!!
hair – dread falls – electronics – makeup – products – stockings – tops -bottoms etc! Oh and Pink Playboy Duvet covers and satin sheets…. Sooooooo nice!
This Friday is THE FITNESS LIFE AWARDS – Wooot! and the Finals of the Go-go Competition! It’s gonna be FUN 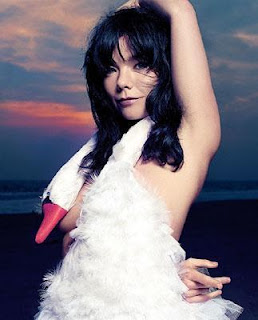 I’m getting this dress made! 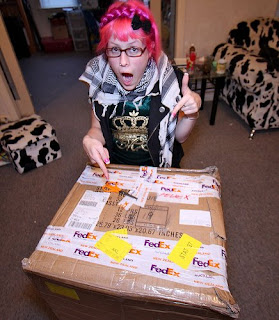 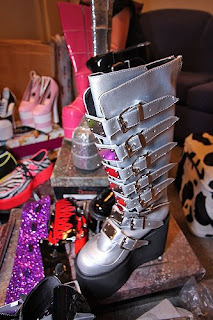 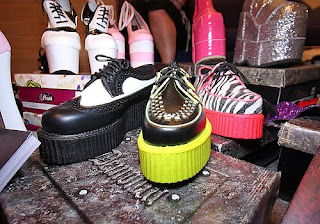