Trying to fit many things into one weekend never works! And being sick and not driving doesn’t help!
However on the plus side I’m allot better.. Flu’s are so frustrating as the remnants of it hang around for ages after you’ve run out of antibiotics! Filming on Thursday was funny tho…

Oh an nothing is better than burgers at midnight after running out of time to have dinner! You’d be surprised how popular a drive through is actually on a week night..

Getting up after a late one is alway horrible and the weather has really taken a turn on the chillier side atm… Less rain = colder nights.. The sunsets are BEAUTIFUL tho.. like breath takingly so! Work functions I always treat with a pinch of salt – You’re supposed to have fun, but behave as all the Managment are always there watching everyone! So friday we’re at the Heritage straight after work. Oh the food was rather delish actually. I think however I mad the mistake of not eating enough carbs.

Anyway running around the hotel with friends who were staying there was MUCH more fun… and I’m planning to go back for a “visit” too I think. In the West Wing there is a Giant Chess Set.. much like this – I was so Kicking myself I didn’t have a camera on me! 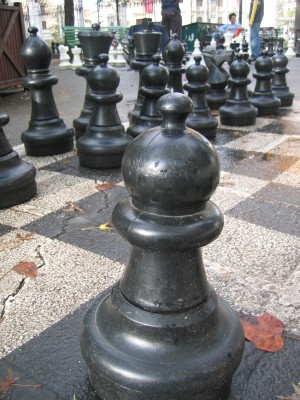 Anyways I hadn’t had much to drink at all, but I’d had my Flu medication too late in the afternoon… I had a reaction to it and it left me very spaced out – Not a nice feeling. I sure everyone around me thought I was plastered, but alas No!

I ended up feeling rather Green for a couple of hours. Then Magically *bing* about 1:30am ish I came totally right! Oooh never again….
Saturday the weather was Glorious.. tho still nippy.. Oh to be in the summer southern hemisphere! Anyway, decided to go to the mall as I hadn’t sorted out a Mother’s day present yet! Malls are fun.. or funny, depending on how much people watching you do.
I always get the tactless toddlers yelling “MUMMY she’s got Pink hair!!!”
Gosh immagine if I had 3 legs or something.. Its generally followed by a “No you can have it darling” type comment which always cracks me up laughing!
I am CandyPhloss – corrupting the kids for a new generation of multi coloured hair!

After that we came home and watched “The Kingdom” in our movie theatre downstairs.. Very moving, tho really not my taste in movies at all! I think sometimes its good to watch something that pushes your metal boundries or opens up your mind to what else goes on in the world outside our little happy boxes!

Saturday night: Working at Ultra – same night was an event called Kings and Queens, so the “Fabulous” abounded! I was well behaved and decided to give my body a break and just drink juice.. The lighting was fantastic – Multi colour lasers (more than just red and green too) look amazing no matter how big the room they’re in is!
I was Paparzzi for the night… Which I really enjoy… I’ve been thinking about getting me a snapshot camera. I did have access to a Cannon 30D but other than not really knowing how to work it – I found it so big and bulky I was paranoid that it would get dropped nocked or broken… Seriously effecting the quality of my night! Not the best idea.
So yea, I’m thinking about buying one soon! If I do I’ll post the photos all up on www.missphloss.com where you can all comment on them!

Sunday was mothers day… Sum of two mothers and two sets of washing dishes ensued! It was ok, seeing my family was good. I love my mum to bits – she is awesome… I do believe Dad doesn’t accept me for who I am. All he ever talks to me about is my job (the only “normal” part of my life) and he doesn’t like my hair pink! Well it was cool, we all gave mum some $$$$ to get her self something with… It gets to the point with parents when buying nicknacks is a waste of time!
I missed the first of cycle 9 of America’s Next Top Model – if you have it