As a big day out Virgin, I had high expetations going into it and I was very impressed to say that I was not dissapointed!

I had a Crazy time! I’m my usual getup, this time with some fabulous pink getups part of it courtesy of MsBehaviour set out with a a crazy bunck of people, Flick, Justin Sane , Tania M , David James , and Gabby Oh and a gorgeous little token Emo, haha. I definately recommend going to big gigs in Groups!

First up was the Lily Allen Signing tent, – so glad we got there early, as it did get a little like sardines at one point, rather like a mosh-pit with out the jumping up and down! YAY I’ll post up a copy of our poster we got signed once I get it scanned!
Lily Allen is cute, very glam rock, like a classy version of Trashy Life actually and I definately recommend getting her album, quite funky music to bob along to!

Media behind the singing table was rather amusing, most of them looking at me like a was a crazy who escaped from a pink sheep factory!

Trying to leave that area I was pounced on by Nz local TV 3 Camera crew and spot interviewed, which I thought was a compliment concidering, but I don’t expect it to be aired, and to the best of my knowledge it hasn’t been yet. Thats commercial TV for ya tho. haha.

To be honest I was suprised at the small number of Emo’s there were there.. I expected to heaps of them swarming around in their “I’ve got to cut myself” circles – there were a whole lot more “REAL” goths instead, (which wasn’t that surprising with the lineup).

On the fashion side of things, before I move on to the music (of course), it was a really good effort for Auckland. As a generally fashion concervative city I think the influx of a larger number of people from through out the rest of the country helped up the colours and the quality!

All pretty good, and everyone was allowed to express their own style without being really all that judged for it! I fully expected to get allot more crap for the pink than I did! I think it more turist attraction appeal.

The above I refrain to to comment. *rolls eyes*

Back on the music, we moved to see Goodnight Nurse. The main arena was filling up slowly, alot of the other stages had either smaller internationals or local acts on.
It was cool, baked a little in the sun, and bounced a little as much as I could subtly do to rock music with out looking like any more of raver out of place.

At this point I had found a flyer that caught my interest – the Durex “Kiss Off competition… Kiss Off I think I managed to get just under 50 Photos, so not too bad, but not as good as I’d hoped. I’ll just have to wait as the compeition closes tomorrow, but I don’t think i’ve won as like most stupid publicity competitions its all based on “Who got the most”. I can guarantee mine were the most intersting and were the most REAL kisses too haha. (Which was all good except the bearded old man in a kilt!!!) ((oops))

From there we headed to the Boiler tent, and hung around and relaxed over lunch time. We didn’t bother getting a bite to eat till a little later as q-ing for an hour wasn’t that appealing! I’m so glad we had sunscreen or like all the other numb-nuts out there we would have been fried and passed out with heat exhuastion and sunstoke. Seriously not cool!

The Killers!
Deciding not to get trampled we headed to the very top of the stands to watch and cool off! It was amazing, the view and the energy from the crowd! Here are some pic’s! 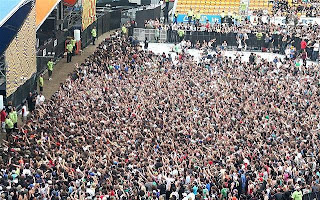 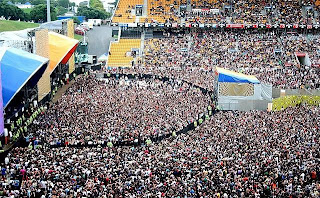 Lilly Allen was awesome, enjoyed bopping along! (thank gawd for the earplugs tho- I bought ear plugs for the boiler room, and I’m SO glad I did and I’ll prolly wear them again or keep them handy at least. I’d hate to loose my hearing and you don’t realise the difference from wearing them till afterwards and your hears arn’t ringing! $1 from St John’s FTW!!)
I loved when she kicked the beachball that hit her telling people they weren’t supposed to hit her with then yelling “C**T” as she kicked it back out! 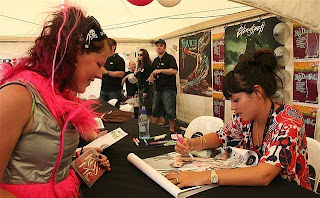 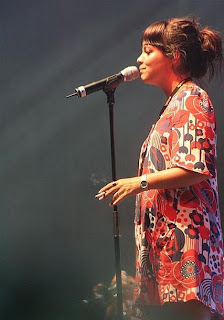 The Streets were fantastic with his crowd interaction too: “when I say now, you all get low, yeah?” – and 30-odd thousand people all crouch down in the boiler room, they on the count of 5 everyone jumped up and when absolutely BANANAS!!

Prolly not something new but awesome neverthe less!

We ended up hanging around outside for the rest of the night and heading off earlish to beat the mad rush out of the stadium.
All in all an AWESOME weekend, GREAT Big Day Out, and I’d defiantely do another one