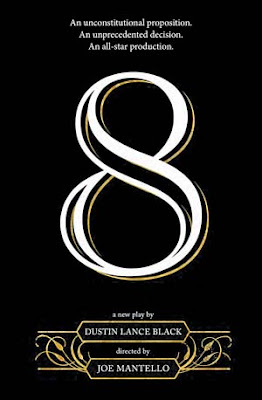 8 (or 8 the Play) is an American play that portrays the legal argument and witness testimony of the Perry v. Schwarzenegger trial, which led to the overturn of California’s Proposition 8. It was created byt ustin Lance Black in light of the federal court system’s refusal to allow release of video booth recordings from the trial and to give the public a true account of what transpired in the courtroom.

The play is written in the style of verbatim theatre reenactment, using transcripts from the trial and journalist records, along with interviews from the plaintiffs, defendants and proponents involved.

This Wednesday is the WTF fundraiser Wednesday 11 July at the Maidment!

The staged reading of 8 features acclaimed actresses Robyn Malcolm, Jennifer Ward-Lealand and Michelle Hine alongside Peter Elliott, Cameron Rhodes and John Davies, as well as Spartacus actor and former Mr Bear New Zealand Heath Jones.
I’m going along on Wednesday to Volunteer as I’m helping out with the WTF campaign! Tickets are free you just need to book in through the Maidment Theatre.  Its awesome to have such big NZ Names in theatre involved in bringing this in the public and supporting the LGBT community.  For more information check out wft.org.nz
Subscribe via Email!